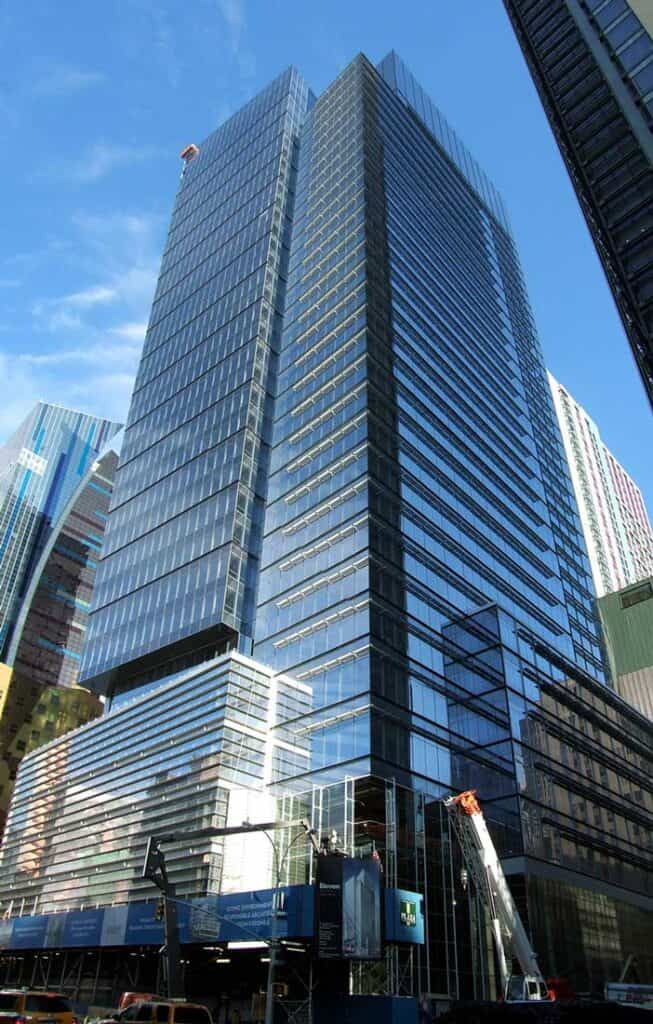 Retrofitting a New York City high rise with stacked rooftop enclosures housing a generator and compressor is challenging enough without Mother Nature throwing a wrench into the works. That was exactly what happened when Robinson and a group of contractors demonstrated exceptional cooperation and expertise in successfully completing a power project atop 11 Times Square, a 40-story office building in Manhattan.

Robinson was contracted to design and deliver two custom enclosures to the site, with the primary power unit being a 17,738-pound, 1000 ekW Caterpillar C32 diesel generator. The challenge was most of the total shipping unit, which weighed in at 53,750 pounds and measured 414 inches in length x 149.6 wide x 162 high, needed to fit through a roof hatch only 62 x 49 inches. It was the equivalent of the biblical rope passing through the eye of a needle.

Mix that improbable task with the limitations of a small, weight-restricted elevator, time restrictions on Manhattan street parking, and a massive winter storm that shut down New York City with a snow emergency, and you have the perfect recipe for a logistical nightmare.

As soon as our team learned that erecting a derrick to lift the assemblies was not a budgetary option, the only remaining alternative was to break down a flatbed trailer’s worth of enclosures and power units into hundreds of parts, and transport them up using a small service elevator.

Robinson crews bolted the skids together in our Wisconsin facility for easier breakdown at the jobsite rather than following our usual process of welding skids together. By the time it shipped, our team was confident everything was going to work.

Work started in Manhattan at 10 p.m. on a Friday and continued through the night. As if on cue, a powerful nor’easter proceeded to dump more than a foot of snow, slush and ice on the city. Strong winds piled snow into six-foot drifts and slowed work to a crawl. Crews moved snow piles from one portion of the roof to another in an attempt to uncover parts and make any semblance of progress.

General contractor J.T. Magen & Company Inc. brought in heaters to hasten the melting process and keep the project moving forward. Brothers Rigging eventually was able to lift the reassembled units about four feet onto the dunnage supports, and then the secondary air compressor enclosure another 18 feet up on top of the primary enclosure.

“When you see the completed project onsite, with these huge enclosures on the roof, it’s almost impossible to believe,” comments Bob Muir, sales engineer for H.O. Penn, the Poughkeepsie, NY-based Caterpillar dealer involved with the project.

It was accomplished with zero change orders and zero delays. It was the right crew, the right contractors and the right rigger.

When you partner with Robinson you can expect:

30% of our team has been at Robinson over 10 years

One point of contact with dedicated estimating and routing team

From concept to completion

Have a project in mind?Let’s Talk!