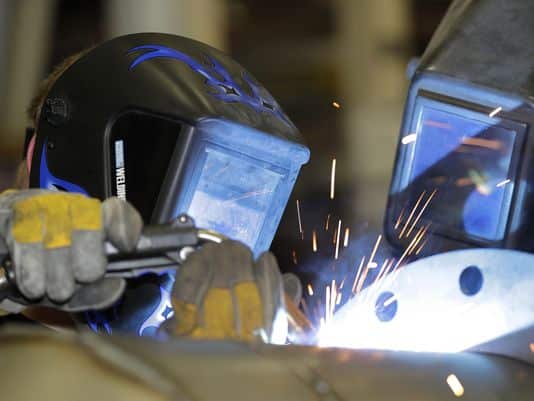 As seen on the Green Bay Press Gazette

Andrew Ferron doesn’t pick up a pencil or boot up a computer for most of his school day. Rather, he grabs a torch and puts on a welding helmet.

The West De Pere High School senior is one of 11 students enrolled in an apprenticeship program launched this school year, called the Trades Career Academy, offered by the West De Pere and De Pere school districts for kids who are interested in a skilled trade after graduation. The students spend two hours in “school” and the remainder of their day working in one of six De Pere businesses, doing machining, welding, engineering or other similar duties.

“I like working with my hands,” said Ferron, who works at Robinson Metal in De Pere. “I get to do a little bit of everything.”

School administrators throughout the state see the benefit of finding a high school fit for students such as Ferron, who do not plan to attend a four-year college but will need training for their future jobs in trades. And businesses, in need of qualified workers, increasingly are willing to partner with schools to prepare students. The Green Bay Area Chamber also coordinates the youth apprenticeship programs. Students earn high school credit and a paycheck as part of the deal, and some will be hired by the companies they work for full-time after high school. Others may use the experience as stepping stone to a technical college associate or certificate program.

The idea of the new program sprouted after West De Pere High School Principal Russ Gerke met with business leaders, who expressed a desire for an apprenticeship program. Administrators on both sides of the Fox River agreed it made sense to share one program. The academy is open to juniors and seniors, and students applied and were interviewed to join the academy. This semester, there are seven students from West De Pere and four from De Pere, all boys.

“For some students, the traditional classroom is just not right, but we want all students to get a good education and a high school diploma,” he said. “This way they get some idea while working if this is something they like, or something they don’t. Students also are excited to get paid.”

Morning classes are held at Belmark Inc., a printing company in De Pere, so students never enter their home high school. Students must take core classes, including English, math and science, and may earn elective credits through their work experience.

And apprenticeships can help students make the leap to a two-year college. Jeff Rafn, president of Northeast Wisconsin Technical College, said that by 2018, nearly 60 percent of jobs will require an education beyond high school, but less than a four-year degree, an increase of 37 percentage points since 1960.

In the future, “14 years of education will be the standard,” he said.

“It works out really well for the high school student who has no idea what they’d like to do,” he said. “I look at it as a test-drive for a career. And in our demographics, it’s been pretty well proven that we have more people leaving the workforce than entering. That’s a real bind for businesses.”

Jamie Tilkens, division manager at Robinson Metal, said they always are on the lookout for good workers. The company employs three West De Pere students from the Trades Academy.

“In this company, our success has been homegrown, and we look to promote from within,” he said. “I tell the students, ‘I have a one-year diploma from NWTC and I am a division manager. There are lots of possibilities in what you can do.”

There’s a big need throughout the area for welders, fabricators and machinists, he said, which is a reason companies such as Robinson are willing to take the work of training high school students.

“There are some things they can’t do,” Tilkens said. “And you do have to spend more time with them, but these kids are great workers and we’ve had no problems.”

He thinks high schools moved away from the idea of teaching trades in favor or preparing kids for four-year colleges around 1990, but that the tide is swinging back.

“They’re doing a great job of setting up programs and getting back to tech schools,” Tilkens said. “And with Baby Boomers retiring, companies are going to be short on workers. We’re looking at ways to train the next generation.”

“I want to be a welder,” he said. “For kids that like to work with their hands and don’t like to sit at school all day, this program is great.”

When you partner with Robinson you can expect:

30% of our team has been at Robinson over 10 years

One point of contact with dedicated estimating and routing team

From concept to completion

Have a project in mind?Let’s Talk!

We are an equal employment opportunity employer. All qualified applicants will receive consideration for employment without regard to race, color, religion, sex, national origin, disability status, protected veteran status or any other characteristic protected by law.

Outsourced metal fabrication continues to be a Robinson strength

We are an equal employment opportunity employer. All qualified applicants will receive consideration for employment without regard to race, color, religion, sex, national origin, disability status, protected veteran status or any other characteristic protected by law.